Affirmations and Words of Power 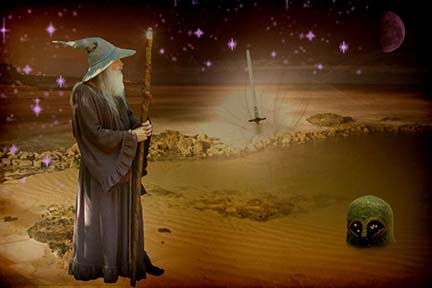 Question: Do I have to wear a long robe and a pointy hat and carry a staff with a crystal on top of it in order to call myself a magician?

Answer: No, not necessarily. But it does help in terms of branding. :)

Years ago when I was attempting to create a spiritual awakening for myself, I studied the works of the Western Occult Tradition. These books included the works of Butler, de Regardie, Yeats, Crowley, Fortune and other practitioners of the arcane arts. I was pretty excited to discover in many of these books, that the authors were also interested in finding the means to experience a spiritual awakening.

So I had found kindred spirits within the pages of those old manuscripts, researchers who shared my desires to uncover the mysteries of the universe and "stare God in the face," as Sheldon Cooper would say. But fearful of what others might think of me, I practiced in private and told no one about my activities. I became a sort of undercover witch, a solitary magical practitioner, as Seth might put it.

Now I am certain that it was these early experiences with the magical arts that helped pave the way for my meeting with Seth, and my subsequent book publishing project with the old boy. I am also now certain that Seth, in various different guises or reincarnational personas, and other similar aspects of evolutionary consciousness, quite probably participated directly with some of the writers of these books.

As you may have guessed, I stand diametrically opposed to those readers who insist that Seth was a "one off" phenomenon, a wise mediumistic effect never to return again to physical reality. In my opinion, not only is the Seth of Jane Roberts and her husband now collaborating with me in this timeframe, but a similar confluence of Seth Entity personality aspects has also informed and inspired the mentalities of writers, philosophers and other cosmic instigators throughout history. imho, whenever the going gets rough for the average citizen, whenever the Negative Elites of the world threaten to destroy humanity entirely, the Seth Entity and other benign spirits come through to remind us of the Ancient Wisdom precepts, that are in fact, Magical Affirmations, and Words of Power. These written and verbal technologies are the bread and butter for magicians, shamans, witches and healers throughout history.

Consider the book Your Word is Your Wand by Florence Scovel Shinn, [1928], (go through the link for a FREE download of this helpful book) sacred-texts.com

I like this affirmation from Florence Shinn's book, I make friends with hindrances and every obstacle becomes a stepping-stone. Every-thing in the Universe, visible and invisible, is working to bring to me my own. I like the idea of turning poison into medicine. The power contained within this suggestion is unmistakable.

Here is another one from her book that is simple, direct and magical, I am in perfect harmony with the working of the law. I stand aside and let Infinite Intelligence make easy and successful my way.

Emil Coue put it this way, Every day in every way I am getting better and better. sacred-texts.com I would call this a simple self-hypnosis auto-suggestion. It is also a Magical Affirmation, if used properly.

I'm sure you remember this incantation from the ancients... abracadabra. sacred-texts.com A Gnostic magical formula, roughly translated, My word becomes real.

Here are the Precepts Seth talked about in Thought Reality, his third book with us...

-- You create your own reality.
-- You are connected to everything in your world.
-- You can change the Consensus Reality from your Personal Reality Field.
-- Emotion is the creative energy of All That Is in action.
-- Human consciousness is founded in Love.
-- Diversions from Love through Negative Emotions create Negative Realities.
-- All imbalances may be corrected through Love and Courage.
-- You are the sum of your Simultaneous Lives within your current Moment Point.
-- Your Inner Senses may be used to examine and change anything past, present or future.
-- You are in telepathic rapport with everything in your world.
-- Reality Constructs are composed of Consciousness Units of awarized energy.
-- Coordinate Points permeate matter and space and modulate the activity of the Consciousness Units.
-- Your Intention, Emotions and Beliefs provide the energy and direction for Reality Creation.
-- Everything exists initially as Gestalts of Consciousness, the nonphysical templates of creation.

My point is this: It seems to me, that, over the generations the Seth Entity and other similar influences enter into the collective consciousness to remind humanity of the Truth. As this occurs, sensitive humans become inspired by these inner promptings, to create visionary, liberating, empowering art of various types, based upon the Ancient Wisdom precepts. These humans work undercover, or they make themselves known as spiritual practitioners and "hang out their shingles." But the commonality here is that ALL seem to have been informed by Beings of Light, Spirits, Angels and other Guides. All of them/us seem to use similar oral and textual technologies to create changes in consciousness. It's mind blowing, when you think about it.

So if you identify yourself as a magical practitioner by getting paid to practice, or you are one of the Lightworker types, working diligently underground and undercover, perhaps using your anonymity to serve the people without their knowing and without fanfare, we salute you. We need all the help we can get. We need all of the Magical Affirmations and Words of Power we can muster to contribute to the healing of humanity and Mother Earth.

This article is based on Seth's concept of Ancient Wisdom Precepts that you can read about in his latest books.
CURRENT MOON
lunar phase