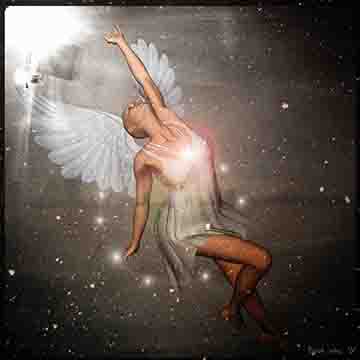 We can learn a lot from the angel people. You know the ones I mean. They seem to be energized with the emotion of Love. They are continually engaged in spreading the positive angel message. They are always smiling. The angel people are part of a movement that acknowledges angels as non-physical beings capable of interacting with and guiding human beings.

Some of the angel practitioners have built upon relationships first begun in childhood religious practices. Some have apparently had awakening experiences in which the angels have contacted them in their sleep or in waking visions. Some have created relationships with their angel guides through reading modern books on the subject and then doing the exercises to initiate contact. But how did all of this angel worship begin, you might ask?

Consider this piece on the Christian Bible, The Angel dictates to Moses the Primeval History from The Book of Jubilees, by R. H. Charles, tr.. (go through the link for a free download of this work) sacred-texts.com

In this creation narrative the Lord is the creator of all things. On the first day the Lord made the heavens and all the spirits that serve him, such as the angel of presence that conveyed this narrative to Moses. Also created were the angels of the spirit of the clouds, of thunder, of lightning, and the other natural manifestations of Earth. These angel spirits then assisted the Lord in the creation of other aspects of the Earth. From the beginning it is implied that the angels participated in the manifestation of the world.

But as the text reveals in the footnotes, this idea probably represents the view of earlier Judaism, since the notion of angel helpers was rejected by later Judaism. And it is the magicians such as Israel Regardie, Dion Fortune, William Butler and others that we are interested in, who honored the angel beings as central to their work. It does seem likely that the modern angel movement, at least partially, was born in the works of these popular metaphysicians.

How does Seth view the angel movement? As he has stated many times in different ways throughout our partnership, By focusing on the different Gestalts of Consciousness you call god, goddess, spirit or angel, you enliven, you vivify, you realize the construct. SETH. I would interpret this as saying that as reality creators we co-create helper spirits to assist us in living successfully on the planet. The angels, the genie of literature, the Energy Personality, Spirit Guides, and others are created by us. Over the generations they endure, gaining power and emphasis when needed by humanity. It may be that we are living in a time when these relationships must be remembered and strengthened if we are to survive.

In my opinion, the important thing we can learn from the angel practitioners is this: by consistantly focusing on contact and communication with Loving non-physical beings, we quite naturally become more Loving ourselves. You get what you focus on, as Seth says. In this case you get your heart opened by the angels.

This post is based on Seth's concept of the Energy Personality that you can read about in his latest books.
CURRENT MOON
lunar phase