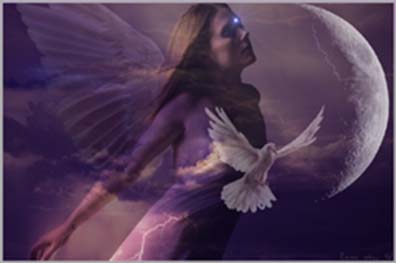 In the Christian bible the ascension of the Jesus figure is vividly portrayed. And we see in other religions descriptions of the holy ones rising up into the etheric domain. But are these stories of humans ascending to meet the Divine simply metaphorical, the product of the imaginations of some over zealous scribes? Or can we, after the prescribed duties, commandments and rituals are considered, literally take our physical bodies into the non-physical world?

Consider this poem from Unveiled Mysteries, by Godfre Ray King, [1934] (go through the link for a free download of this inspiring piece) sacred-texts.com

Yes, as the poem implies, on the path of awakening the Soul becomes enflamed with the desire for knowledge. This knowledge is knowledge of the Divine or "the Truth of the matter," as Seth calls it. You are on a personal journey and so the Truth you are discovering is the Truth of your personal Identity. Your awakening, therefore, is an awakening to self: your Higher Self. You begin to uncover the Truth, first, the Truth of you personally, and secondly, the Truth of your world i.e.; everything that is not you: your planet, your environment, your family, your mate. "All secrets are revealed," as Seth has described this process. And as the Truth becomes known you ARE brought up, emotionally and spiritually, and you DO ascend, in the sense that you drop your shame, your fear, your anger and all of the negativity of the past. You drop your attachments to the physical world.

But practical ascension does not mean that you lose ALL contact with the physical world. For you DO maintain contact with the Third Dimension, even as you may be exploring the Fourth, Fifth and Sixth Dimensions. "The multidimensional identity abides consciously in both the physical and the non-physical worlds," says Seth. Multitasking, he calls it.

Seth might say that, yes, you do ascend, but you do not leave your body behind. You become cognizant of all of your reincarnational lives here and now. So rather than simply enjoying brief flashbacks to past lives experiences, you are able to visit other lifetimes even while you may be engaged in a conversation with your friends in this current existence. In this sense, you ARE ascending. You are travelling to a different timeframe to encounter your other lives.

It seems to me that Seth's awakening perspective parallels what is known as the New Age concept of self-ascension, of consciously transcending the Third Dimension to advance to a higher state of consciousness, one that is filled with love and acceptance and devoid of the negative emotions. In his new books, Seth embraces the philosophy of the New Agers. He sees their efforts as a sign that The Shift he predicted in 2002 has begun and that these visionaries are leading the way to multidimensional consciousness. But however you describe it, it is obvious that something monumental is happening for millions of spiritual practitioners. The ascension has apparently begun. Don't be left out on all of the fun.

This post is based on Seth's concept of Ascension that you can read about in his latest books.
CURRENT MOON
lunar phase