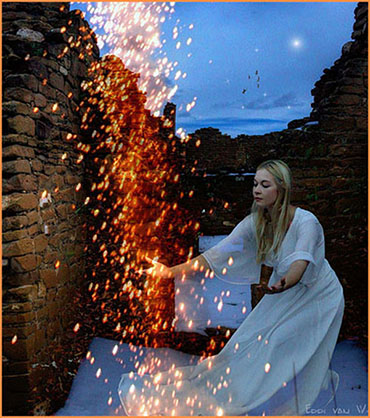 It's the first of May. Time to light fires from a single source, signifying our solidarity with each other and with All That Is. It's a time for positive expectation, as we look forward to sunny days. We know that it's coming, just as before: warm weather, the time for planting, growth, then harvesting, abundance, and the slow-down as winter returns. But now we are optimistic. The future is bright. There is positive energy in the air.
The Seth Teaching Optimism plays an important role in the Seth Teaching. It is the basis for positive Reality Creation, which is the goal of every Seth student. Seth calls optimism an "altared state." It is a state of consciousness marked by a feeling of positivity or Good Humor. There is also an implied choice here. The optimist chooses to be positive. Rather than surrender to the forces of Negative Emotion, the optimist connects with what Seth calls the Higher Centers of Awareness, or the Divine. Over time, the many choices to manifest the positive yield positive results: Ecstasy, Awakening, the Heart's Desire.
Social Optimism Just as in the fire rituals of Beltane, the Seth student keeps a "good thought" moment-to-moment throughout the waking reality. The Highest Good For All is the primary consideration. This is what you think of before you act. Not simply what would prosper you, but what would be best for the collective. Then you do that. This attitude reinforces a type of telepathic good will. It facilitates group cohesion. So awakening does begin with the application of social optimism.
Economic Optimism In the financial domain, according to Seth, a similar dynamic is operative. You plant your garden of prosperity with positive thoughts, images, and emotions, then you continually nourish the soil with the positive energies. The positive expectation is held within the mental environment throughout the waking state. You prosper as do all the individual members of the tribe. You give it all away, energetically and literally. All of it, All That Is, is returned to you. This is your mantra.
Political Optimism The current Presidential Primary illustrates the value in embodying political optimism. The entrenched corrupt politicians who have been re-elected over the years by triggering negative states of consciousness in the electorate - fear, cynicism, racism, Lack - are now failing. Their manipulations are no longer effective. The political optimists, such as Bernie Sanders and others, are appealing to the positive emotions - Love, co-operation, sympathy, courage - and finding success. Again, see how group cohesion may grow through the positive rather than the negative.
Spiritual Optimism The power of optimism is easy to observe in the spiritual domain. As the devotee connects with the Divine, ecstasy occurs. Through continued ritual and prayer, this positive state endures and intensifies within consciousness. The telepathic rapport created within a group of like-minded practitioners is strong and powerful. Awakening happens en masse.
Ancient Wisdom When we create our realities in the moment, we have a choice. The Seth Teaching is simply another form of Ancient Wisdom spiritual practice. The suggestions given are simple and the effects are profound. Keep a good thought. Create community through Love. Talk to you next month...
CURRENT MOON
lunar phase