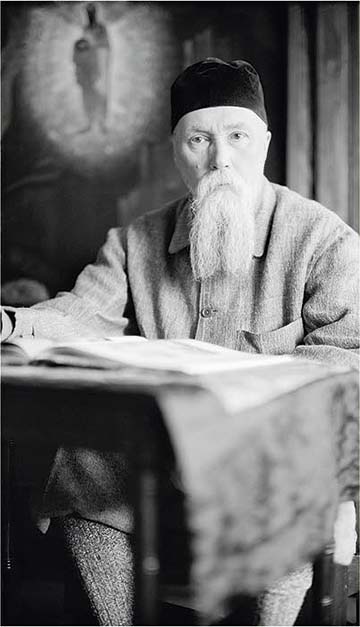 I spent a good part of May this year in the Himalayas of India. One of Seth's students was kind enough to invite me to tag along on a spiritual quest, and I gratefully accepted, eager to see first hand the people, the monasteries and other sacred architecture, and of course the Himalayas.
While I was there I witnessed some amazing events. But the most impressive experience of the trip was the illuminated state of consciousness that we often enjoyed while in those magic mountains.
Cosmic Consciousness I would call it. And it's key feature? A perception of Instant Manifestation.
Roerich the New Age Master
The change of state from hermit channeler and high tech manager to awakening visionaries seemed to begin when we visited the Roerich Art Gallery in Naggar. Nicholas Roerich was a Russian who fell in love with the beautiful hills of the Himalayas and settled there shortly after the Russian Revolution. He married Helena, a well-known Russian philosopher and writer, and began to build his estate, and continued writing his short stories, creating his poems, and most importantly, painting. 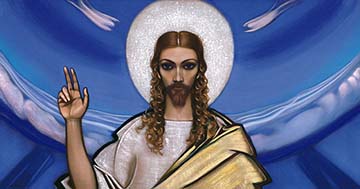 Roerich was prolific. Inspired by his wife Helena, he created around 7,000 masterful and compelling paintings of his beloved mountains, the Indian gods and goddesses, Christ and the Saints and the Magicians and Cosmic Instigators of antiquity. He painted the spirits of the non-physical world with such vibrancy, it seemed as though he knew them personally. More about this later...
Altared States
In the following ten days, we were often in what Seth would call an 'altared state' of consciousness. We were entranced by the people and the 'spirit of place' that we felt in the shrines and waterfalls and rivers we visited. There is something about the water, straight off the mountain glaciers, complete with essential minerals that my western body needed to heal itself. My companion spent several spell-binding minutes enthralled in the mist of a skyscraper tall waterfall, communing with Jogni, the Divine Feminine Spirit who lived there. Seth told us before we left for India that we would meet people there who were naturally in touch with their reincarnational lives. And yes, I met strangers there that I recognized and who seemed to recognize me. Past lives? It seemed to me that I was getting confirmation.
Healthy Wealthy and Awakened
Seth talks about the New Consciousness of Fourth Dimensional Reality, and I think that was what I experienced in India, at least when I was aware enough of my own consciousness to notice what was going on. There is so much natural beauty there to contemplate and to adore that you find yourself forgetting that what you were just moments before wishing and hoping would happen, IS NOW HAPPENING! In a way, the miraculous became standard operating procedure in the Himalayas.
Synchronicities were occurring constantly. That was fun. But also our Issues became prominent and materialized when we focused on them. Whenever we gave them a moment's notice, our Negative Personas became dramatized right in front of our eyes. Seth calls these performances of humans in their Issues 'reincarnational dramas.' They are a type of subconscious acting-out that we do to others. This concept has never been so dramatically demonstrated for me as it was in India. It was tough. But conversely, when my focus was on Love, immediately I was shown examples of that in my personal reality.
The Mark of the Maker
Seth has told us that his books, and the works of other visionaries such as Roerich, contain a type of energy that allows viewers to commune with the spirit of the artist and acquire their knowledge and in some cases, to begin to see the world through their eyes. It seems to be a type of siddhi, or spiritual power, that is contained within the words and images. A case in point: When I returned to California I put a copy of the Master Jesus painting (see image) above my workstation for inspiration and to my surprise, I found myself being guided to research the life of Roerich and his contemporaries, Blavatsky and Gurdjieff. I thought there might be something there for me. There was something there. The one thing shared by all three of these visionaries: they were all guided by the non-physical beings. Roerich communed with the Ascended Masters and others as he painted their portraits. Gurdjieff obviously knew his Angels personally, both fallen and ascended. Blavatsky, another of Roerich's contemporaries, knew very well her Masters of the non-physical world. She wrote books with them. It seemed to me that I was being shown confirmation of my intuition in this lineage of teachers and Masters that came before my association with Seth. What I get from these findings, is that many of us who connect to the Unknown Reality are tuning-in to a similar signal or waveband. Roerich's Cosmic Consciousness, Gurdfieff's Fourth Way and Blavatsky's Theosophy are all products of this connection to the non-physical beings. When I commune with Seth and my Guides as I take down their dictation, I am connecting to a similar Source, though my interpretation of Seth has a modern slant, for I do live in the modern world.
Grounding the Cosmic Energies
Back to our Spiritual Quest... Bringing the magical state of consciousness we experienced in the Himalayas back to the States and the mundane reality proved to be difficult. Our modern culture does not support self-authority, self-healing, miracles and the visionary life. But the Quest continues. On Seth's advice to remember the Feeling Tones I experienced while in the awakened state in India, I am getting better at re-creating the awakened moment NOW. The challenge is to express Love to everyone and everything. When I can do that I am back in the Magic Mountains, underneath the waterfall with Jogni, the spirit of the Divine Feminine.
The UFO Connection
Also worth noting is the Roerich UFO incident. I add this because I love the image that it brings to mind... In August of 1927, while on an expedition in the Himalayas, Roerich and his team saw a massive, metallic disk-shaped aircraft flying over the Altai-Himalaya. They described it as glistening in the sun, as it flew in one direction at a great speed and then abruptly changed direction, and disappeared into the sky. A member of the team familiar with the area, said the craft was protecting Shambhala, the legendary kingdom said to exist in those same mountains.
Nicholas Roerich, Altai-Himalaya: A travel diary.
See also G. I. Gurdjieff, In Search of Being: The Fourth Way to Consciousness .
H.P. Blavatsky, The Secret Doctrine.
This article is based on Seth's concepts of the Ancient Wisdom, subtext and Awakening that you can read about in his latest books.
CURRENT MOON
lunar phase