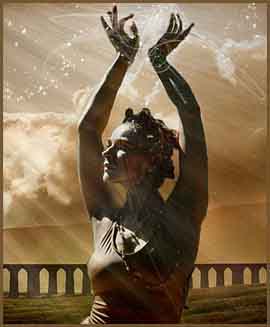 Back in the 80's I found myself a part of a Vonnegut karass of artists, musicians, poets and pranksters in Marin County CA. A partner of mine had commandeered a derelict restaurant named the Ali Baba, and invited 'all who would be merry and bright' to hang out. We rechristened her the Kali Baba, in honor of the goddess Kali, and made plans for our adventures therein with plenty of beer, psychedelics and instant coffee.

Out of work and most everything else, it just felt good to get together and create music, and a little bit of local legend. If you were kind you might call what we did in that building a form of performance art. But what it was, I think, was a series of invocations of some of the more powerful aspects of the Goddess: We were flirting with a number of goddesses back then. Chaos, Eris and Discordia were honored. But Kali was the goddess that demanded attention.

Consider the Book of the Goddess, by Anna Livia Plurabelle. (go through the link to the underworld for a FREE download of this inspirational work) sacred-texts.com

We were like pirates living just of the coast of the culture and we found the terrible aspects of Kali somehow consoling. In her triumph in desolation we found meaning in our own tenuous condition. We dedicated whole days to Her eminence... 'Blessed be Kali, Goddess of the Underworld; Skull-wreathed, terrible Goddess Death, destroyer of Universes;' But this was not a misery loves company thing. It was a celebration of our separation from the mainstream. We had joyously destroyed our past and now looked forward to a new world. And shortly, it would arrive. Like a tractor beam Kali Baba's drew from out of the surrounding neighborhoods a succession of interesting characters who found themselves coming through the back doors of the restaurant. Each had a story to tell or a song to sing. Each had a Lesson to teach or to learn. As Seth might describe it, 'At appropriate times in your experience, your Soul Family members become known to you. Serendipitously, synchronistically, they enter into your life.' 'she who sits at the gate of rebirth; She who weighs our heart in the scales; If it weighs less than a pomegranate seed; She will send you on to the summerland;' It did seem as though Kali was in attendance at all times, noting our shenanigans. One day a guy who was off his meds came in and perched in the loft and torched a 20 dollar bill to teach us about 'value.' He disappeared afterwards, merging into the summer haze outside on the street. This was at the foot of the Warrior's Path that the Miwok took to travel to the top of the Sleeping Lady, Mount Tamalpais, or so they say... 'If it is heavier, you will wander in the Bardos; To find rebirth and find love once more.' Most of the voyagers who came through those doors decided to become regulars, at least for a while. They stayed to play music, dance, recite and laugh. Then, as the summer ended, one-by-one they vacated the premises, absorbed by the culture just outside.

I was one of the last to leave. They were going to turn it into an Indian restaurant. As I packed my bags you could feel the spirit of Kali saying goodbye and good luck as she welcomed the rest of the Hindu pantheon. Gung Hay Fat Choy everybody!

This article is based on Seth's concept of the Soul Family that you can read about in his latest books.
CURRENT MOON
lunar phase