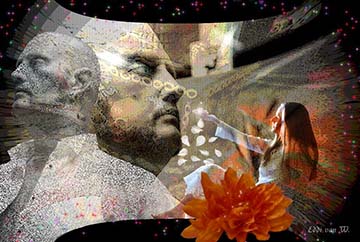 Seth has an interesting theory on who and what he is as an etheric teacher to his students. It goes something like this...
You Create Your Reality As the student, your perception of who Seth is literally shapes and creates the master/student relationship. So your concept of Seth is an entirely new construction, one that did not exist previously. In your collaboration with Seth, as you read his books and internalize his messages, you create a personalized perception of what you believe Seth is, that you then identify as THE Seth. You project your own beliefs and imagery onto the Seth Entity. What you experience as feedback is a Seth that is different from anyone else's Seth. It is a Seth that has as much of you in it, as it does Seth. The reasoning? You create your reality through the lenses of your beliefs. Your creations naturally reflect your identity and your belief system.
Trust but Verify It looks and sounds and feels like Seth, but it is, in fact, "an amalgam," as Seth would say, of your hopes, dreams, beliefs and emotions in combination with the particular personality aspects of the Seth Entity with which you resonate. Pretty complex, I admit. But this is an important point, I think. It is important to be aware of what you are perceiving/creating in the spiritual domain. If your Guide, Seth or any other non-physical being, begins to appear as negative, threatening, evil, ask yourself if that perception is your projection of fear. Trust but verify.
Projections of Consciousness Another way to describe this process, is that "you create God in your own image," as the saying goes. This phenomenon of projections of consciousness pertains to religious figures and objects of worship of all types, such as the Master Jesus and other non-physical beings. We are "god-makers," as Seth has reminded us countless times in his books. We can't help ourselves, really. It seems to be this compelling urge to create the ideal, in terms of the embodiment of ethical standards, such as the Virtues of Humanity. But because we are also the embodiment of human frailties, our projections of the Divine have deficits. Our gods and goddesses have "feet of clay."
Trading Places And here is where it really gets interesting. Seth tells us, that, because you are drawn to this material and you value it and you believe it is true, you are probably a member of the Seth Entity. As such, the potential is there for you, at some point, to trade places and become the teacher yourself, in one of your Simultaneous Existences. In that sense, you ARE Seth in potential. As Seth has stated, "Your future evolved Self looks back at you through time and counsels you. This is who you think of as Seth. This is that aspect of your divinity I am describing."
As Above So Below The woman in the illustration above engages in rapturous devotion with her perception of the guru master. Seth might say, that, at the same time, she is also praising and worshipping her own Higher Self, her divinity or what you might call her Future Progressed Self. This is a new paradigm of understanding, here, in which we can reject outmoded beliefs that place us as subservient to the Divine, as sinful humans trying to be "good people." We are already good people. We are already without sin. We are already the Divine. We are the master even as we are the humble student."You are awakening to your divinity. You are ridding yourself of religious programming," counsels Seth.
Issues and Lessons Seth frames the reincarnational journey as one of identifying Issues and learning Lessons. The Issues are those deficits of character that we acknowledge, and with the help of a teacher of some kind, attempt to heal. But the transformation process of healing the psyche does not take place in subjugation to a higher authority, such as a God or his envoys. The awakening takes place within a partnership between the master and the student. The student is essentially responding to their own divine projections onto the master. The student and the master are equals in the moment of realization.