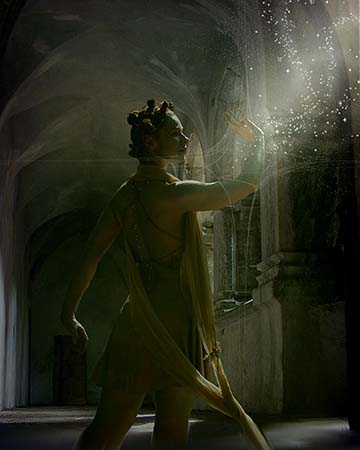 When I was 20 years old I had an accident while driving a small tractor. The year was 1970 and I was attending The Cluster School of Expressive Arts, an experimental project just off the campus of Sonoma State College. (I was accepted at Berkeley but the day I visited the campus, helicopters were flying overhead with blow horns telling us to go home. Then they shot some teargas canisters into the open area for good measure. So I chose The Cluster School.)

I lived off campus in Sebastopol on a cute little ranch with an apple orchard, a rundown house, and a Jewish couple from Van Nuys. We named the place The Funky Chicken Ranch after a favorite dance song. Instead of shaking hands when we greeted each other, we just did a little bit of The Funky Chicken.

But back to the story... The throttle on the little tractor got stuck and to my horror, I was slammed into one of the apple trees. My right leg took the brunt of the impact as I tumbled off of the still running tractor, holding the gash on my knee together with my hands.

The couple I was living with did not know about my exploits with the tractor, and so it was some time before they discovered me. Later they told me I had a smile on my face.

Consider the book Initiation, Human and Solar, by Alice A. Bailey. (go through the link into the etheric for a FREE download of this wise work) sacred-texts.com

'You could have lost your leg. You could have bled to death,' the paramedics said. All true. But why was I smiling? I was prone on the ground looking up into the sky, and to me it looked a little like the scene from Clash of the Titans where the gods and goddesses appear in the heavens as they plot what to do next with the hero. But what I saw were these images of men and women dressed in long flowing robes, looking down at me not with disdain, but with genuine concern and compassion in their eyes. And in this case, I was in charge. I was the determiner of my fate, not the gods and goddesses. I was smiling, comfortable and content with my decision to live. In his new books, Seth talks about a group of highly evolved beings that advise Souls-like-us, on when and where to incarnate, as well as when and where to make our Transition, i.e.; die. He calls the group The Council and the members of the group he refers to as the Masters and Beings of Light. Seth has received some criticism over the years for these revelations, some of it coming from me. But now I can truly appreciate his candor. It is a pity that we do not meet these guys more regularly during our lives, and only during the (NDE) Near Death Experience and at other times of extreme crisis.

In San Francisco during the early 80's I had another Momentary Awakening when I accidentally took a dose of pain medication that I was allergic to. Again, I found myself prone on the kitchen floor, facing up. My heart was beating so fast that I could not count the beats per 10 second intervals. I felt as though it was going to literally explode. I knew I was about to die. Then, the kitchen ceiling parted to reveal the people in the long robes in the sky. I was immediately filled with relief and ecstasy. Again, these Masters had loving concern on their faces. I received the thought that they agreed with my decision to stay.

I think what we are calling the gods and goddesses, what Bailey refers to as the Hierarchy, and what Seth has called The Council, are all of a similar type of phenomenon. Seth and others have stated that our god-making skill is one of our most notable human attributes. We are always helping to create and then be influenced by the non-physical beings. These constructs are of our own making, yes, but they are more than that. They receive the imprinting over the generations from the collective energy being projected onto them. Apparently, this is how an idea of a god becomes a god. The gods and goddesses are literally worshipped into being. As Seth describes it, 'The members of The Council exist in what you may call your Future. Thus, they are privy to Issues and Lessons you have not yet experienced. Naturally, then, they may be considered as valuable advisors for you. They exist outside of time as your Loving Guidance Counselors, so to speak.' What is the take-away from our discussion today? I think it might be this: Whenever you think that you are at a point in your life where you are the most alone and vulnerable you could ever be, you are, even then, still in fact, among 'the bright and shining ones.' Even then you are still a Reality Creator. Even then you have the capacity and perhaps also the responsibility to turn it around.

This article is based on Seth's concepts of the Spiritual Hierarchy, The Council and Momentary Awakenings that you can read about in his latest books.
CURRENT MOON
lunar phase