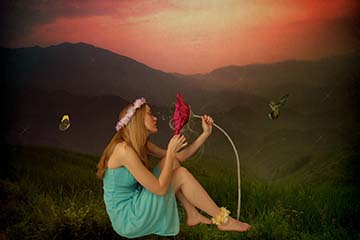 The term "magic" means different things to different people. To the seller of health supplements it may describe the activity of a particular vitamin. To the student of religions it could refer to the "primitive rituals" of our ancestors. To the alternative spiritual practitioner, it might mean something completely different. So considering these differences of opinion, can we even agree on what the fundamental components of magic might be? What does it take to create magic?

Consider this book on Huna, The Secret Science Behind Miracles, by Max Freedom Long. (go through the link for a free download of this seminal work) sacred-texts.com

In the Huna tradition, as Long explains, the practitioner works with the forces of nature to prophecize, to create positive futures out of negative ones and to heal. But first, to experience natural magic, you must be "entranced with nature." This means that you acknowledge your ultimate connection to the Earth and to the cosmos. It is this allegiance to the natural world that sets the stage for the instructional phase to begin.

In this process of mastering the magical approach, Long suggests that three elements emerge to support the enterprise: There must be some form of consciousness directing the magical processes, some form of force used in exerting control and some form of substance, visible or invisible, through which the force can act.

Let's compare these descriptions with the corresponding elements of the Seth Teaching, to see if the Seth system qualifies as a magical system according to Long's criteria. In his books with us, Seth has consistently spoken of the three levels of consciousness: the subconscious, the conscious and the Higher Levels of Awareness or the Divine, as he also calls it. These levels roughly parallel the threefold levels of Huna consciousness. Seth has stated that the force of manifestation is electro-magnetic within a context of Coordinate Points that "hold" the Reality Constructs. Compare this with the activity of the three voltages of vital energy in Huna. The substance or etheric matter in the Seth system, is composed of Consciousness Units of sentient energy that emerge into the physical field via subconscious and conscious Intent. Again, this description parallels the description of the Huna system. As Seth has stated many times, Our theory of Reality Creation has always been, in fact, a restatement of what is called the perennial philosophy. It represents the best that the Ancient Wisdom has to offer. SETH

Of course this comparison is not definitive. I simply wished to identify the source from which virtually ALL spiritual practices seem to spring. The magical parts, the elements that DO work, appear to originate from that one reservoir of collective consciousness. Seth calls this material the Ancient Wisdom, but it is known as nature magic when practiced by a dedicated student.

This post is based on Seth's concept of Natural Magic that you can read about in his latest books.
CURRENT MOON
lunar phase