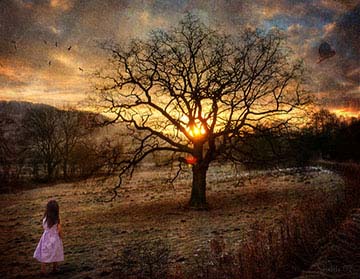 The signs are all around us. You would have to be asleep - unconscious - not to notice. And just now, as I was writing this update out on the deck, I heard a commotion overhead. Some crows were exclaiming that something was wrong in their world, as they so often do up here in the woods.
Then I immediately heard the unmistakable screech of an eagle. Looking up, I saw the eagle through the trees as it escaped the wrath of the much smaller crows. I've heard that an eagle will take the baby crows right out of the nests. That was probably why there was the disturbance. But because this update is all about signs, I am going to interpret it somewhat differently...
The Eagle and the Crow So the Truth Teller Crow was only heard and recognized by a few of his flock. All of the others were in a Trance of conformity, thinking they were being protected by the Negative Leader Eagle. And so they continued to allow the Eagle to take their children. "It is the way it has always been done," they would say to each other. "Do not question the authority of these Leaders, who obviously know more than we do about the situation. There is probably a very good reason for them to come and take our children, and tell us what to do, and generally keep us in fear. For example," she continued, "that female eagle that is now feeding my child to her young once held a high office in The Aviary. She is experienced." I hope I'm not taking this too far...
Visionary Hawk Then one day Visionary Hawk came to town. Contrary to most, he was wide-awake, and knew the truth of the situation. He was not distracted by the rationalizations of the others. He thought for himself and did not respond in fear to manufactured events calculated to condition and dull the mind. Oh no, this was a hawk who listened to his instincts, his intuition. He consulted himself in all matters, and had learned how to trust the answers he received from his Higher Centers of Hawk Awareness.
The Awakening of Birds At first, they ignored the Visionary Hawk. He was talking about some dangerous ideas, ideas that threatened the security of the Eagles, and so, of The Flock. But then gradually, over time, some birds began to awaken to these new ideas of self-determination, freedom and Bird Power. The young birds especially began to follow Visionary Hawk around, to hear what he had to say.
Then They Laughed Of course, the majority laughed at the Hawk, because that is what they were told to do by the authorities on Bird TV. But then an amazing thing happened: a large segment of The Flock became aware of the Truth. Call it instinct or call it a divine message from the great spirit OWL. Whatever you call it, the efforts of Visionary Hawk had ultimately, over the course of 15 months, inspired great numbers of birds to begin to act on their own behalf on orders from their own Bird Spirits.
Then They Fought Now the Negative Leader Eagles fought the newly awakened Birds with beak and talon. They were not going to relinquish control. They were determined to fight to the finish, for many were a part of a criminal conspiracy of Birds. These Negative Leader Birds were guilty of the most heinous acts one can imagine, as a Bird. They could not afford these misdeeds to come to light.
Then They Lost But these dirty Birds, these Negative Leader Eagles, were driven from their high offices in the aerie. You see, a Tipping Point had been reached within the Collective Bird Consciousness. "Enough is enough," became the rallying cry for birds everywhere as they assembled in small collectives within the greater Flock. Then, as if by instinct, the awakened Visionary Birds took charge of the Bird Government and promised to lead for the highest good of all Birds. And the sound of ecstatic chirping was heard throughout the land...
CURRENT MOON
lunar phase