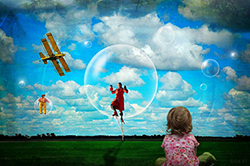 Today is the perfect day to discuss one of my favorite topics that Seth talks about in his new books: The Magical Child. This is a perspective or a state of consciousness that I find to be very helpful in creating Positive Realities. It is a natural state that everyone has experienced, even, according to Seth, if your childhood was less than pleasant.
Visions Some of us are still masters of the Magical Child perspective. In a sense, we never forgot that we can purposefully, imaginatively, envision our world into being. The Magical Child perspective sees the world through rose colored glasses, to coin a phrase. So the creative process is positive. The assumption is that All is Well, that we live in a safe universe, that people are generally good, that we are being taken care of.
Dinosaurs I remember vividly a day when I was quite young, just going to grade school. I was playing with my friends out on the front lawn of our house in Utah. We were taking turns pretending we were all in a different reality than the normal one in which we were playing. We liked scary realities. It was getting close to Halloween. In Utah there is a great respect for the dinosaur. We studied them in school. My best friend, when it was his turn, said to me, "Look at that big tree in front of you. It's really a dinosaur. It's going to eat us." Then he ran, screaming, to his house across the street. And as I looked up at the oak tree in our front yard, just for a split second, it looked like a dinosaur, a T Rex. I was so frightened by what my imagination had created in that second, that I too ran in fear. I burst through the front door of our house at a high speed. I was out of breath. My mother asked me what was wrong. I replied, "Nothing. I'm just playing."
Practical Play I suppose that the Magical Child perspective, the way that I enjoy it now, is as a form of adult play. I am always playing with my perceived reality, in one way or another. Since I have been with Seth, my life has begun to revolve around techniques for co-creating my world in an improved fashion. So I am beginning to believe the Seth motto that we humans are in fact magicians. We literally DO create our realities, both the positive and the negative.
Waking Up in the Moment If I am driving my car or otherwise engaged in dangerous activities, of course I do not experiment with the Magical Child state of consciousness. However, that leaves hours and hours of time to practice "whenever I think about it." You should try it. And if anybody complains, just look them in the eye and say with authority, "Don't have a cow. I'm just playing."