HOME > Weblog > Tools of the Tyrant

Tools of the Tyrant 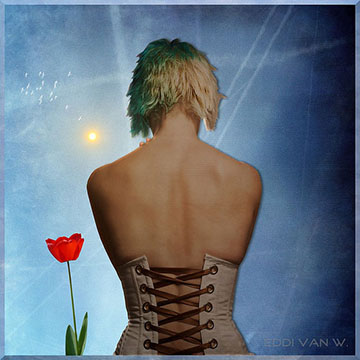 Against a background of chemtrailed skies, with the sun barely able to pierce the toxic fog, a corset-bound woman, her head bowed in subjugation, fails to notice the beautiful flower beside her. Is she asleep? Is she in a trance? What came before to bring her to this desolate space?
Mind Control The CIA's Project MK Ultra was a series of experiments conducted on human beings, sometimes without their consent, to study how certain drugs and procedures might be used to weaken the will and elicit confessions from individuals or groups through mind control. Working through colleges and universities, hospitals, prisons and pharmaceutical companies, the CIA used LSD and other drugs, hypnosis, sensory deprivation, isolation, verbal and sexual abuse, and various forms of torture to gather their data.
Who benefited from this research? The Military, Madison Avenue, the Federal Government, politicians and leaders in industry benefited.
Stockholm Syndrome Stockholm syndrome, first described in 1973, is a type of traumatic bonding in which hostages begin to have sympathy for and identify with their captors. The hostage apparently identifies a lack of abuse from their captor as an act of kindness. The syndrome may develop in relationships in which one person intermittently harasses, beats, threatens, abuses, or intimidates another person or group.
Who benefited from this research? Social Scientists, the Military, Madison Avenue, the Federal Government, politicians and leaders in industry benefited.
The Double Bind The Double Bind, first described by Gregory Bateson in the 1950s, is a means to control others indirectly. Typically, a demand is imposed upon an individual or group by an authority figure but the demand itself is inherently impossible to fulfill because some broader context forbids it. For example, an abusive father might demand both love and obedience from their child, who they are abusing secretly. The child is in a Double Bind. They cannot stay and they cannot speak out. The child might dissociate and leave the body while being abused to keep the psyche intact.
The woman in the picture above is caught in a Double Bind. She lives in a free country but she is not free. She feels compelled to restrict herself, to hide her power. Chemtrails are there to see but she cannot talk about it to others. Do not question the authorities. Do you see? From her perception she has no choice but to remain in bondage to the authorities.
Who benefited from this research? Social Scientists, the Military, Madison Avenue, the Federal Government, politicians and leaders in industry benefited.
The Psychopathic Leader All of this research into the best way to control individuals and groups supports the growth of a group of very powerful men and women: the Psychopathic Leaders. The psychopathic leader does not care about us, but they must pretend to care. They lie to us with impunity. They want power and wealth and they will manipulate and abuse us to get it. Whatever it takes to succeed, they will do it and they will do it over and over to stay in power. Go through this link to see how this is done.
Psychological Manipulation
Tools of the Visionary So how brainwashed are you? The remedy here is, of course, to awaken to the truth. Become the visionary. Think for yourself. Connect with your Source and take your own advice. Disconnect from all communications of propaganda from the psychopathic leaders. Heal yourself by going on your own Path of Awakening. Wake up and be Courageously Loving in your Personal Reality. Listen to the voice of your multi-dimensional Soul!
CURRENT MOON
lunar phase