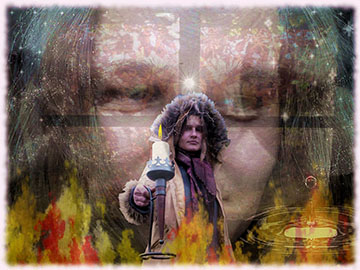 According to The Golden Bough by Sir James George Frazer, (go through the link for a free download of this magical book) gutenberg.org leaders of long ago who failed in their leadership roles were ejected from society. They were forced to live in the wilderness and fend for themselves. Because they took an oath to lead in an ethical fashion and they broke that oath they took their medicine willingly. That was the relationship the leader of old had with the people.
Now we are lucky if we get an apology out of our failed leaders, as they head out to serve on the boards of corporations for millions of dollars in salary. Yet they also made promises to lead in an ethical way, with the best interests, "the highest good," as their goal. They promised they would do the people's work. They even took solemn oaths on the Bible and other sacred texts.
We seem to be, as though coming out of a fog of abuse and neglect, at long last speaking of our desires for true leadership. The media now spin this movement as a 'populist revolt.' I think that it is far more important and transformative than they would have us believe. What the talking heads are treating as a mere talking point, many of us are recognizing as our last best hope for any reclamation of our rights of self-determination. It is no less than a mass awakening.
If the people lead, the leaders will follow. I think that this might be true. For if all of us begin to create from our most noble Intentions, soon we could find that we have become the leaders we desire.
We will not need to look for visionary leaders to emerge from our Presidency, from the House and Senate, from our State legislatures, from our PTA or from any other group, for WE WILL BE THAT.
When we are inspired from our Source we naturally choose wisely: for the highest good of all. When we can lead our families, our businesses, our cities and states according to visionary principles, it will only be a matter of time before we can reject the outmoded belief in the value of authoritarian leadership. We will be able to acknowledge the visionary leader within each individual.
And most importantly, we will no longer project our collective need for protection onto a charismatic figure: one who may lead us into unnecessary wars, into financial schemes that divest us from our money, or into other opportunities to surrender our power.